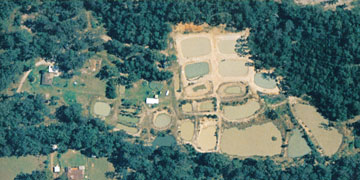 I designed and personally built this entire farm in 1987

The above farm was a world first in fish farm & hatchery design. It was 100% private water catchment and disposal. Something all Australian irrigators need to address for the coming future... If a fish farm can do it anything is possible..

And, the farm was built with a “home improvement loan” of $60,000 as that was the only way to get bank approval. What a gamble it was.What a gamble all aquaculture was.

By 1988 this farm was selling fingerlings, and ironically, the largest exporter of native fish fry in Australia. Some several million in fact. That success led to consultancy work in China on Chinese Government projects as well as work covering Asia, Africa, South America and Italy, of all places culturing Australian yabbies.

The farm itself, also sold about 5 tonne of live silver perch per 18 months at $24.50 per kg and approximately 100,000 silver perch, golden perch and bass fingerlings per season. Indeed the farm never grossed less than $100,000 per annum with a staff of 1.5. Not bad for the nineties.

And proudly, it was the site of the experimental work that proved zooplankton production to be a sustainable method for high quality aquatic protein production for all feeds for animal production. A global potential indeed. And yet today we are still raping the oceans for a far inferior source of aquatic protein. I guess when the oceans are dead people might understand? My guess is not. And it pains to know that and have developed solutions which are ignored.

Yes: My farm was a huge success, years ahead in fact, and the design was set to change the world. Or so I thought.

However, on the 4th of July 1999 (how ironic and unplanned was this independence day, yeah right...) two police officers came to my front door and informed me that my partner had an Apprehended Violence Order. And that I was not to come within 1 kilometre of the property for a period of two years.. The poor woman was living in fear of her life...That's all it takes. One statement of contrived fabrication.

The cops escorted me off-site in the clothes I had on… There were over $200,000 worth of stock on the farm that were simply left to bird predation.

Now, had there been some or any discussion of relationship failure I could have easily purchased a beach house, and separated on good terms.... Why? To this day I do not know.

My entire life and business was destroyed over lies and careful planning by a partner and cunning solicitor intent on devious destruction of a 20 year marriage.

A diverse partner addicted to nicotine, other substances and alcohol. Indeed a grossly hormonally unstable person who used lies and the law to gain full advantage and control over all the farm assets as set out in the Family Law Courts of Australia. Hateful lies that had me arrested and processed for Grafton goal for 40 days without charge. Only luck and some careful name dropping saved my soul at the last minute. You have not lived until you have been witch-hunted by the NSW Police Force. And such dealings are common practice.

I fought the charges and spent 9 months on bail because I pleaded not guilty. Eventually I was told by the judge that I was innocent, found guilty and immediately had the charges dismissed. "Mr Gordon you are free to go." Go where? I say go figure the legal system for covering its behind.

Actually, the entire divorce plan was a brilliant 'view to a kill'. Horrendously corrupt and criminal but brilliantly portrayed. A career in politics would be a breeze. It is a corrupt woman's world that I see as the future. And then total collapse will follow.


Eventually that promising farm became a three story beach house from its sale. The fish farm site now lies abandoned to this day, and still holding water and still with many thousands of native fish. Say no more.

I left that ugly relationship with an old Ford wagon, a few surfboards, a strange criminal record and one hell of an emotional scar. Life started again from scratch at 45 years of age. And I think Surfing really saved my life. I lectured aquaculture in Broome and surfed, found fish work in Fiji for a year and surfed, worked in Sydney in the movie industry and surfed, consulted in marine science in Singapore and surfed Nias, laboured in the coal mines of the Hunter Valley and surfed Newcastle. I also completed a Masters in Marine Science Aquaculture and developed several design patents. What an aquafarmer ride! To hell and back with a net and a bucket. And I think most of the future of fish farming has solutions within my scope of work. Especially sustainable protein production.

With hind-site I feel it is almost but not quite wrong to be an Australian farmer of anything, especially independent, unsubsidised aquafarming and commercial fishermen. Unless of course you are Chinese. It is not racist just an observation of fact. And, I am certain that somewhere hidden away there is an Office of Farming Suppression working hard to rectify that struggling remnant of Aussieism.

However, the real story here is; the suppressed story of the many, many Aussie men who suffer the same fate at the hands of currupt and volatile women and the Australian Family Law System. It is a scam and it’s a one sided affair to blame men, mostly, and yet it is law. Women, in family law situations, are always right and when they are wrong they are still right. Men are always wrong. So my only tip is, never ever argue. That was my mistake. I thought I was right!

In the 20 years since then I have not seen my two boys for more than a few weeks total and never shared a birthday or a Christmas or a fathers day. Such utter male grieving remains a no-go area and yet we shake our heads in contempt when utterly distraught men breakdown and destroy whatever is left.

Men, emotionally destroyed by laws and lies, often taking actions, that are cruel beyond measure, in an induced madness from absolute soulless and systematic betrayal and yet not a single word of empathy for these men, displaced, disavowed and disowned. Well, except for their ability to pay child support. Family Law in Australia is an amoral dark ages.The root cause of breakdown, if you like.

As a country we create the blood bath arena and wait like ghouls to shake our heads in moral ignorance at the root cause. I as a divorced father of two have served my life sentence in silence and still there is no reprieve, no absolution, no turning back, no sons to brighten the day. No one cares and no one listens except when child support is unpaid... I cannot change the past for the past was law and I am but one of many manslaves to the machine. The machine that is my country. I, have no rights.

My own country, once strong in moral fibre, has failed in the simplest of family goals as the future slides further into diverse confusion and quarantined stupidity. It is almost but not quite wrong to be a heterosexual male. But I'm sure somewhere there is an Office of Diversity working to rectify that issue.